Fans have been speculating about the future of GOT7 for months now as the end of their seven year contract with JYP Entertainment is coming near. We got news about Jinyong discussing to sign with BH Entertainment late December and about Yugyeom possibly signing with hip hop label AOMG last week. Although none of those news were verified by the members or JYP Entertainment at the time, we finally got an official statement from JYP Entertainment on January 11 about all members of GOT7 leaving the company after their contract ends on January 19.

“JYP has held thorough discussions with the GOT7 members ahead of the expiration of their exclusive contract on January 19. As a result, both sides have agreed not to renew the contract while hoping for a fresh future,” reads the official statement from JYP Entertainment (according to Soompi). “Our official relationship ends here, but JYP will sincerely cheer on the new future that the GOT7 members will advance into.”

Previously on January 10, Dispatch released a news article outlining the possible future plans of the seven members – specifically which companies they are planning to sign exclusive contracts with. Both Jinyoung and Yugyeom apparently had their final discussions with BH Entertainment and AOMG, respectively. The site claims that Youngjae has been approached by Sublime Artist Agency, JB has received offers from multiple agencies, and Jackson will manage his overall schedules through his own label, Team Wang, and his schedules and activities in Korea through another agency.

Dispatch reports that BamBam is in discussion with MakeUs Entertainment for further activities and Korea and that he is planning to work both in Korean and Thailand. Mark will return to Los Angeles and start his own Youtube channel and continue his musical endeavours there, according to the news site. Additionally, they also state that Mark and BamBam are discussing launching their own labels and that all members want to promote together as GOT7 as well.

Although none of the members of GOT7 have confirmed or denied these claims by Dispatch, they have all taken to their social media to express that this isn’t the end of GOT7. On January 10, Mark tweeted, “The past 7 years have been the best years of my life. Nothing is coming to an end, just the beginning. The seven of us are going to continue to bring you guys the best version of us till the end. #GOT7FOREVER” 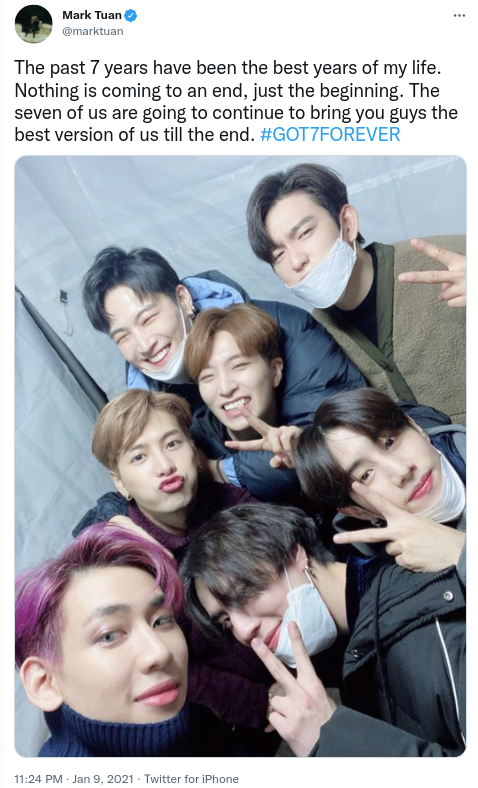